After a longer period of inactivity, the SI special interest group on Artificial Intelligence and Cognitive Science (SGAICO) was successfully relaunched on May 27, 2013 with the SGAICO Forum featuring two distinguished speakers in AI/CogSci.

The room at PH Zurich was well filled with a mix of participants from academia and industry representing various areas in Switzerland, when president Bernhard Hämmerli expressed the interest of SI in having an active group covering the AI/CogSci fields. Given the increasing number of successfully fielded AI applications in the industry world wide and current challenges such as big data and analytics/business intelligence, AI/CogSci Technologies become more important than ever. 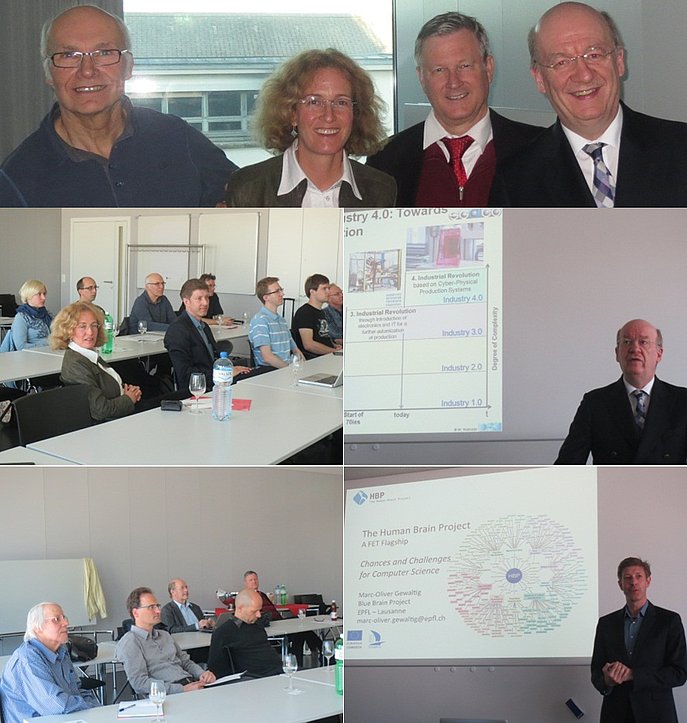 Abstracts, Speaker Bios, and links to slides can be found further below.

In his talk about the Industry 4.0 programme, Wolfgang Wahlster of DFKI pointed out the enormous potential for Switzerland’s producing industry, but also challenges in handling the next innovations in intelligent manufactoring. Switzerland, Germany and northern Italy are world market leader in plant engineering. Consequently Wahlster suggested that focusing on building smart factories and analysing smart sensor data instead of applying efforts to social media might be the right way for European AI researchers. The possibilities presented in this talk surely helped in fostering an understanding of what applied AI and data science in Europe might be up to in terms of widespread industrial applications as well as funding.

Marc-Oliver Gewaltig presented the EU flagship “Human Brain Project”. Combining the efforts of a very large consortium, this initiative is focusing to improve our understanding of the brain and on how we could cure brain-related deseases.  Using beautifully rendered videoclips, he gave insights into the process of accurately simulating parts of a rodent’s brain and making it to learn tasks like body control. He also explained the state of the art in human brain research and explained the setup and funding of this FET flagship project.

The final Apéro was thankfully used by the participants to exchange ideas with the speakers and to network with each other well beyond the official ending of the event.

Archive with videos und powerpoint slides (free for usage for teaching within Switzerland, for additional usages, please contact the author)

We argue that active semantic product memories will play a key role in the upcoming fourth industrial revolution based on cyber-physical production systems. Low-cost and compact digital storage, sensors and radio modules make it possible to embed a digital memory into a product for recording all relevant events throughout the entire lifecycle of the artifact.  By capturing and interpreting ambient conditions and user actions, such computationally enhanced products have a data shadow and are able to perceive and control their environment, to analyze their observations and to communicate with other smart objects and human users about their lifelog data.  Cyber-physical systems and the Internet of Things lead to a disruptive change in the production architecture: the workpiece navigates through a highly instrumented smart factory and tries to find the production services that it needs in order to meet its individual product specifications stored on the product memory. In contrast to the classical centralized production planning and manufacturing execution systems, this leads to decentralized production logic, where the emerging product with its object memory is not only a central information container, but also an observer, a negotiator and an agent in the production process. A semantic service architecture based on a production ontology and ubiquitous microweb servers realizes intelligent match­making processed between emerging products and production tools.  We illustrate this revolutionary production architecture with examples from DFKI’s fully operational Smart Factory.  We show that AI technologies such as semantic web services, multiagent systems, Big Data analytics, and intelligent user interfaces are key drivers of the fourth industrial revolution. Industry 4.0 is an integral part of the high-tech strategy of the German government with a volume of more than 400 Million Euro.

Recently, the European Commission selected the Human Brain Project (HBP) as one of two Flagship projects, each receiving a prospected funding of 1 billion euro. The Human Brain Project builds on the foundations of the Blue Brain Project which was founded in 2005 with the mission to integrate anatomical, electrophysiological and genetic data into a unified model of the neocortical column. Over the course of 10 years, the HBP will create an integrated system of six ICT platforms, dedicated to Neuroinformatics, Brain Simulation, Medical Informatics, High Performance Computing, Neuromorphic Computing, and Neurorobotics. These platforms will lay the foundation for a new kind of ICT based brain research. Three of the HBP platforms are dedicated to investigating novel, brain-derived technologies for future computers and computer science. The High-Performance Computing Platform will use brain-derived principles to design the next generation of super-computers. The Neuromorphic Computing Platform investigates how brain-derived principles can be directly embodied in new computing hardware. Finally, the Neurorobotics Platform will allow researchers to use and explore brain models in simulated closed-loop robotics experiments. In this talk I will give an overview of the Human Brain Project. I will then describe in more detail the preparatory research for the Neurorobotics Platform, on the basis of the pioneering work of the Blue Brain Project. Along the way, I will summarize the challenges and opportunities the Human Brain Project offers to computer science.

Wolfgang Wahlster is the Director and CEO of the German Research Center for Artificial Intelligence (DFKI) and a Professor of Computer Science at Saarland University. He has published more than 200 technical papers and 10 books on user modeling, spoken dialog systems, mobile and multimodal user interfaces, instrumented environments, the semantic web, as well as the internet of things and services. He is an AAAI Fellow, an ECCAI Fellow, and a GI Fellow. In 2001, the President of Germany presented the German Future Prize to Professor Wahlster for his work on intelligent user interfaces, the highest personal scientific award in Germany. He was elected Foreign Member of the Royal Swedish Nobel Prize Academy of Sciences in Stockholm and Full Member of the German National Academy of Sciences Leopoldina that was founded in 1652. He has been awarded the Federal Cross of Merit, First Class of Germany. Prof. Wahlster has also been appointed member of the Research Union “Business – Science” as Chief Scientific Advisor for ICT research of the German government. He is a member of the Executive Steering Board of the EIT ICT Labs and serves on the Executive Board of the International Computer Science Institute at UC Berkeley. He is the editor of Springer’s LNAI series and on the editorial board of various top international CS journals like CACM. In 2013, Wolfgang Wahlster was selected for the prestigious IJCAI DSA award for his substantial contributions, as well as his extensive service to the field of Artificial Intelligence throughout his career.

Dr. Marc-Oliver Gewaltig received his Ph.D. in Physics in 1999 from the Ruhr-University in Bochum, Germany with a dissertation on the propagation of synchronous spike activity in cortical networks (Diesmann et al., 1999). From 1998, he worked for Honda R&D Europe in Offenbach/Main, Germany. In 2003, he became Project Manager for Computational Neuroscience at the newly founded Honda Research Institute Europe, where he developed detailed columnar models of information processing in the primate visual cortex (Schrader et al., 2009). In 2011, he joined the Blue Brain Project to head the Neurorobotics group, which aims to demonstrate the computational capabilities of the neocortical column in closed action-perception loops. He has a strong interest in the computer science and technology for large-scale neural simulations. He is co-author of the neural simulation tool NEST (Gewaltig&Diesmann, 2007) and co-founder of the NEST Initiative (http://www.nest-initiative.org).